Home > Overseas Markets > An Overview of the BRIC Economies

An Overview of the BRIC Economies 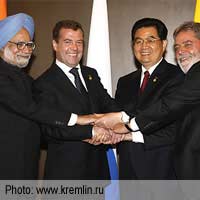 In 2001 the Goldman Sachs global economic team in their paper ‘Dreaming with BRICs: The Path to 2050’ developed the BRIC theory that groups together the economies of Brazil, Russia, India and China. These countries look set to become the dominant economies by 2050. Estimates vary, but these regions could see a growth from 20 per cent in 2003 to 40 per cent by 2025 alone.

No one is saying that these four countries have a strategic plan to align themselves together to form an European Union like economic region, but indications are that the BRIC economies can see vast commercial opportunities if they have closer economic ties with each other. This alignment was reinforced as representatives of the BRIC members met in 2008. What may develop between the members of the BRIC alliance is a G8 [Canada, France, Germany, Italy, Japan, Russia, United Kingdom, and the United States like co-operation.

The economic power that the BRIC countries wield can’t be underestimated by any business that trades overseas. Combined, the BRIC economies contain 40 per cent of the world’s population making them an even larger market than China alone that continues to be the focus of much overseas trade from the West.

Goldman Sachs revisited their BRIC thesis in 2004 and included more detail about how the populations of the BRIC countries would become new markets. They predict that the average annual income within the BRIC economies will reach $15,000 (approx. £11,000) by 2025 that equates to 200 million consumers.

Like China, Brazil has a growing middle class that is increasingly beginning to appreciate consumer goods and services. The UK currently exports just under $2 billion worth of goods each year making the UK Brazil’s 15th largest supplier. Trade between Brazil and UK now stands at $5 billion, and increase of nearly 24 per cent since 2006

Building and improving infrastructure continues to dominate the Russian economy, but the future will see a vast increase in the demand for a plethora of goods and services sourced from Western suppliers. Russia is the UK’s 16th largest export market. Last year saw exports reach their highest totalling £2.8 billion - an increase of 36 per cent since 2006.

As one of the fastest growing economies in the world, India presents a massively lucrative market for all UK businesses. Consumer goods are experiencing rapid growth thanks to the emerging middle classes. The last trade figures from 2005 revealed that near £4 billion of goods and services were exported to India.

Of all the BRIC economies China has shown the most astonishing growth of nine per cent per year. China’s economy is rapidly expanding as it continues to industrialise and modernise every facet of its society. “China is sitting on reserves of over US$1.4 trillion and its leaders are trying to figure out how to spend that money without fuelling inflation. Huge economic changes are afoot from which UK companies can benefit,” says David Marsden, Director UK and Ireland, Hong Kong Trade Development Council.

What the development of the BRIC markets shows all businesses that trade overseas, or have plans to expand into foreign markets that the economic landscape of Eastern Europe and the Far East is rapidly changing. As China and India industrialise their citizens will become the leading consumers in the 21st Century. Of course all predictions of market growth should be approached carefully. But it seems inevitable that the BRIC economies will evolve. Your business should prepare itself to sell its goods and services to these markets as they become developed over the next decade.